Rémi Cavagna Is All Of Us

I want to write about Paris-Nice today. Not about any of the obvious things, like the inevitability of Primož Roglič dispatching everyone around him on the final climb en route to near-certain victory; or the resurgent Michael Matthews, here to race every day back in his home colors at BikeExchange; or the USA’s great new GC hopes sitting at third and sixth place on the road. No, the image that will stay with me from stage 4 is the beleaguered Rémi Cavagna.

To explain myself we need to go back to the stage 3 time trial. The first drama was whether Roglič would, in fact, win the bike race here, and for a minute he was sitting in the hot seat. Even as he was doing so, though, Cavagna was charging ahead, already some ticks ahead of him at the intermediate sprint, and in the end he wound up six seconds ahead of the Slovenian and first place on the day. When the cameras found him afterward he was completely and utterly drained, able to barely lift his hands from the handlebars only to wipe the spew from his stubble. Time trials!

I’m not sure he even had time to recover and make it to the hot seat before word arrived that EF Education-Nippo’s Stefan Bissegger – a man so unheralded on the day that, despite his many Swiss junior national championships on the track and in this discipline (or his second-place to the TT world champion at the UAE Tour just last month), the camera motos didn’t even bother to follow him on course – had taken first place by less than a second. After the stage Cavagna lamented any number of things that cost him the win. Notably, he overtook the rider who went out on course one minute before him right at the final turn before the finish, having to brake unexpectedly to avoid a collision. Think of it: you’re so fast, so clearly at the top of your game right now, that it actually costs you the victory. Road cycling is mean.

But the wonderful thing about stage racing is that there’s always another chance tomorrow. And so here we are: on the slopes of Chiroubles, wine country below us, and above the sight of our man Rémi Cavagna, chasing down Trek-Segafredo’s Julien Bernard in what appears at first glance to be the winning move. The two are working together well, holding off a peloton that in fits and starts is deciding whether to try and catch them, when suddenly… he’s moving backwards. Is he cracked? A puncture? He’s stuck in the big ring… it couldn’t be the shifters, no? Surely not…

But here we are, and the Shimano neutral service is there to help, and then the confirmation: battery’s dead, electronic shifting won’t work. Gotta wait for the team car. Done for the day. The pack mercilessly passes, the only recognition a rueful glance back by one Alpecin rider being shunted off the back, not sure who’s worse off.

The imperious Primož Roglič is the story of the race, and to see him march off the front is a sight to behold. It’s beautiful, to hear him tell it, and if you don’t want to take his word for it you can take Kate Wagner’s (and then subscribe to the newsletter). It’s beautiful, and it’s inspiring, but it’s not relatable, is it? What’s relatable is having your day’s work done in by, alternately, a) some bullshit you can’t control, or b) tiny, innocuous things you don’t even realize are problems at the time. I mean, look at him: who among us has not, at one time or another this year, been here? 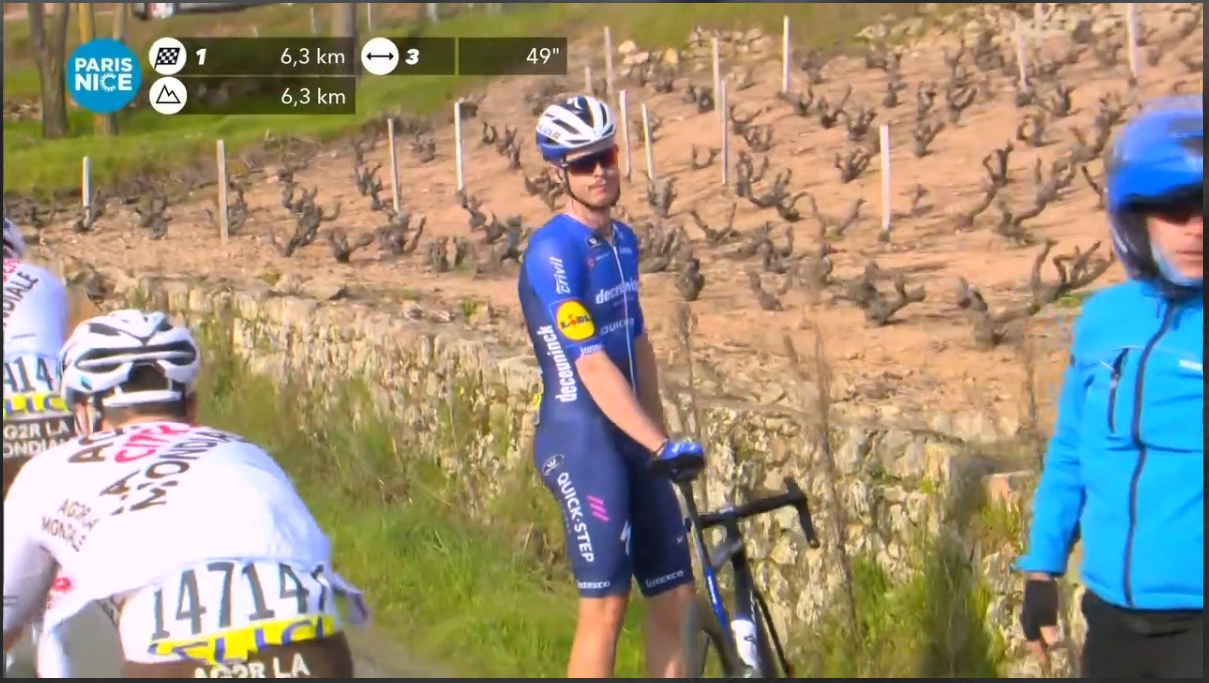 I’d offer him a hug but they’ve been banned by the UCI.

There are a million reasons both large and small to follow professional cycling, and today this is mine: here is a man who is over it, and we all feel that. And, because he rides for Quick-Step and this is the spring, he will get onto that top step sooner rather than later, and when you put up with some crap it’s always nice to get to the other side.

Written 2021 March 10. Questions, comments, or just want to chat about whatever? E-mail me or find me on Twitter.